Rothenburg already was a city of political and economic importance seven hundred years ago with several hostels and inns; For in a city code around the year 1280 there is mention of hostels and drinking-rooms, as certain orders were issued. When the “King of Rothenburg”, Mayor Heinrich Toppler, guided the fortunes of the imperial city with a strong hand, and had erected the precious relic of the Holy Blood in the St James Church, it began an immense pilgrimage of the faithful to Rothenburg.

Many, many strangers from all parts of Germany visited the lovely town above the Tauber valley in every year before 1400 and wanted to find food and good drink here after having completed their devotions.

From the river valley, From the Valley of the river the crowds of pilgrims at the Goblin cell Church passed through the gate in the rising blacksmith Street to market square and the great St. James Church. Especially in the Schmiedgasse there were always hostels and drinking-rooms for strangers.

Peculiar to Rothenburg is the fact that the businesses at that time still had no names, and were not shield led, but so-called hedge farms and only afterwards the owners were designated. It was not until about fifty years after the peasant war of 1525, that is, around 1580, that the first businesses emerged with designated names marked.
Also in the lower Schmiedgasse – the part was called “Der Holzmarkt” – at this time an innkeeper protruded a sign into the street on a long arm and displayed a jumping, golden stag. 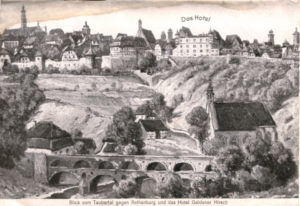 Around 350 years ago – in the year 1588 – the first landlord appeared in the documents of the “Golden Stag” in Rothenburg. He was called Hans Weber and must have acquired the hostel only a short time before; Because in 1588, his son Hans Weber, landlord in Bossendorf and his son-in-law Wolfenopenner, demanded the payment of the maternal inheritance, after the now Golden Stag host had sold his farm in Mettlesholz and moved to Rothenburg. This is a brief note about the first Golden Stag host. Life in a medieval inn was essentially the same as today. On the market days the Franconian peasants came out of the neighborhood with their wagons to the city to get rid of their agricultural produce and buy other goods. But then they returned for supper and good drink, amongst others. And also in the Golden Stag, before which, in a long series, the peasants were resting. The citizens and artisans of the city also met in the evening to discuss their news and worries over beer and wine, or to try their luck with the dice. 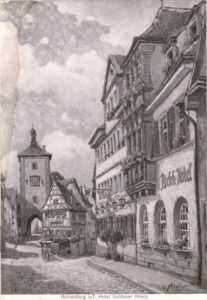 Colorful and multi-faceted is the fate of a house – like the people who possess it and spend their lives in it. In 1616 the Golden Stag host Leonhard Stellwag led a process with his neighbor Michael König because of the need for water, which brought the water to the Hostel. This Leonhard Stellwag operated a business, and he was also a baker. His father Josephat Stellwag was a senator of the Reichstadt and was a member of one of the most respected families of Rothenburg.

Like a mighty thunderstorm, the Thirty Years’ War broke out over Germany from 1618 to 1648, destroying a flourishing land. Men fell into death or bitter distress, fertile lands became deserts, the peasants fled horrified into the woods.

Instead of peasants, soldiers of all peoples populated the imperial city of Rothenburg and stayed there for long or short periods according to how the war was going. A colorful life developed in the guesthouse of the Golden Stag, as officers and soldiers were there; But they mostly forgot to pay. The city was supposed to do this, but the bag became empty and emptier. By the time of 1627 the Golden Stag host Georg Körn looked anxiously into the future and wished for the end of the mock war. But there was still no reason to think of this, but he had to witness the horrible capture of the Reichstadt Rothenburg by Field Marshall Tilly and the saving champion in 1631. 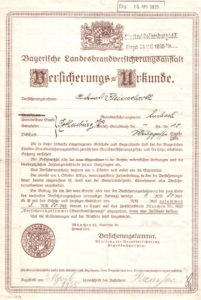 When the thirty years of war came to an end, because the country and the people had been burned out, the Golden Stag was owned by Adam Raab, who apparently elevated the guest house and, as well, still carried out extensive agriculture.

How hard the innkeepers and beer-brewers had already been grouped together in a guild, and were fighting against foreign elements, clearly shows in a complaint that the young Cübler could not be accepted into the guild because his grandfather was still a town-shepherd. In spite of all this, Conrad Cübler became Golden Stag host.

In the wars about 1690, officers from the most diverse nations were lodged in the Hostel. The Guesthouse of the Golden Stag in Rothenburg must have been very respectable. The owner was at this time Adam Wolff. He bought a house in the Wendgasse in 1697, after selling the Hostel to a descendant of the master drinker Nusch, Georg Conrad. Georg Conrad Nusch died on 19 August 1728, and his widow married Georg Hirsching, his father, in the spring of 1736. The House coat of arms comes from this Hirsching, in 1600 by the Emperor Rudolph II. The Hirsching family in Rothenburg was awarded this. The coat of arms shows in the upper half a jumping deer, the lower half is blue and gold divided with a golden ball with horizontal iron tires and a perpendicular iron rod ending in a barb It is a strange coincidence that now even the coat of arms of the family Hirsching helped to the financial debt of the Hirschens. 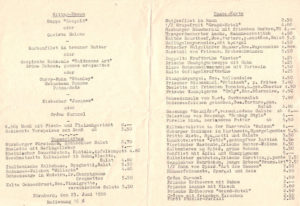 The new host was an enterprising man, and apparently well-to-do. In 1738 he had the whole house demolished and rebuilt again, but one floor higher.
In 1744, after the death of the host, Christoph Korndr bought the inn.
In 1748 we meet the Golden Stag landlady Johanna Maria Forster, who gave the estate to her son Johann Michael Förster in 1759.

Johann Georg Wolff, from a well-known Rothenburg beer brewer’s family, owned the hostel from 1784. The brewery must have had a significant beer turnover. It was his son, Friedrich Daniel, who had to lead it over a difficult time when, in 1802, the last hour of the free imperial city of Rothenburg hit, and it came to the crown of Bavaria.

In 1801, his son had taken over the property house No. 118 in the Schmiedgasse with the adjoining buildings and a barn in the Wendgasse with a root garden for -9,500 guilders. Friedrich Daniel Wolff purchased the confectioner Roth’s dwelling house No. 117 for 1,700 guilders on August 15, 1815, and tore down both houses. In the year 1816, a new inn was built on the enlarged ground surface of the Golden Stag, which forms the basis for today’s hotel. 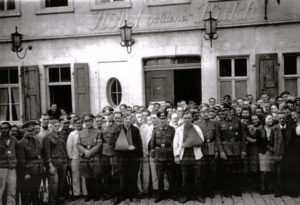 Three hundred and fifty years of the hotel business for the “Golden Stag” in Rothenburg o. D. Tauber! In the aftermath of the peasant war the modest hostel hardly looked over the city wall. It grew over the course of the next centuries and today it is impossible to overlook the mighty hotel with its incomparably beautiful view of the fortunate millennial kingdom of Rothenburg and the lovely Tauber valley. It has become a historic hotel of the Meistertrunkstadt, from which Rothenburg is an unforgettable experience.