Every hour the Master Draught

Thanks to three watches the time never stops in the Ratstrinkstube 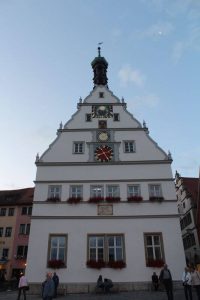 The gable of Ratstrinkstube adorns the next big town clock dating from 1683 with a date display and a sundial mounted anno 1768 and the famous imperial city crest. Once only councilors were allowed to operate, but now the Rothenburg tourist service is now in the building and is the first stop for anyone visiting the city. Also noteworthy is the astronomical clock on the facade of the building , which represents the legendary Master Draught of 1631 through to 1910. She opens her shutters from10.00-22.00 every hour on the hour and shows the famous scene, whereby the former mayor Nusch at the command of Count Tilly drank a 3.25 -liter tankard with delicious Franconian wine in one gulp and thus Rothenburg was saved from destruction by the Catholic troops.