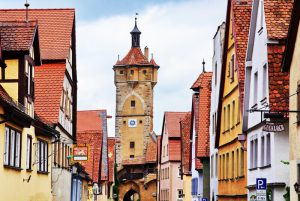 The original tower Röder which was partially destroyed in 1945 by enemy action, was a tower shell, that is, it opened toward downtown . Later all the towers of the city were completely walled. The upper part resembled the Stöberleinsturm with its four core plug, and was completely different from its current form. The tower room was occupied with changing guards.

The main tower is the oldest part of it. It dates from the 13th century, and the timber floor was set up after the war. Two beautiful customs and guardhouses, with ” Spiked helmets ” flank the front gate of the tower Roder and extends behind the bailey. From the so-called ” string towers ” even attackers which had penetrated into the bailey could be repelled.