A defense system to deter 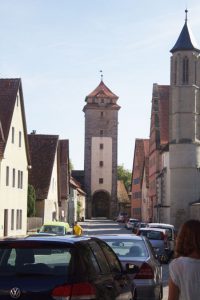 The Spital Gate is a bastion of the fortifications of the town of Rothenburg and served as a deterrent. This was achieved by an exaggerated beefy construction and a system with multiple ports. This massive military construction dates from the 17th Century and is the youngest system of its kind. The mighty bulwark welcomes its visitors with the Latin inscription – “Pax intrantibus , salus exeuntibus ” translated to English “Peace to those who enter in, good health to those who leave again”. These impressive fortifications were created in the form of a figure eight by Leonhard Weidmann at the end of the 16th Century. Seven gates , a portcullis, a drawbridge and the navigable guns of Rothenburg protected against attacks from the south. You can also explore from inside this testimony of Rothenburg’s defense.