The St. George Fountain impresses in its size 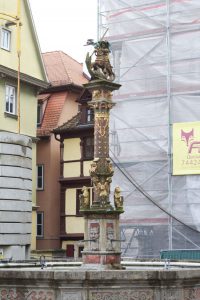 With eight meters of water and a capacity of 100,000 liters the St. George Herter or ego Fountain is the largest fountain in Rothenburg. Previously, it was an important drinking water reservoir and thus essential for the livelihood of the population. Even today a lot of guests from around the world come to the fountain in the market place between the town hall and the meat and dance hall, and they are astonished by its imposing appearance. Its decorations from the Renaissance were mounted in 1608. They used to stand in front of the fountain gallows, the pillory and turning cottage of which today there is nothing more to see. For over 400 years, an elaborate column was decorated on the fountain crowned by the figure of St George which included dragons.