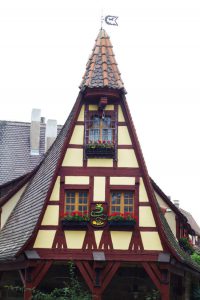 Between the Rödertor and Galgentor towers is the Old Forge or the Gerlachschmiede. It is, with its petite and pretty gabled windows – even though only a replica – one of the most beautiful half-timbered houses in Rothenburg . Before 1945, the house was only a barn with a gable and exposed brickwork . It was completely destroyed during an air raid in 1945 and only built again around 1951. It was restored according to its old appearance, but with historical designs and a timbered gable. The coat of arms plaque with the winning line is a creation of the legendary Georg Gerlach, the blacksmith. 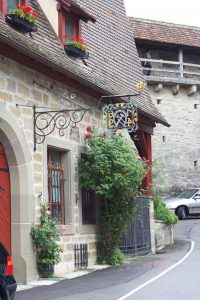 Until 1967 the forge was still active as a blacksmith’s workshop, but has since closed and is in private hands.