The St. Mary’s pharmacy was once the political center 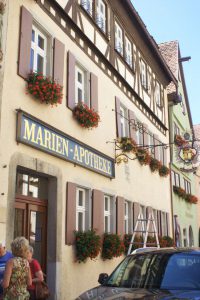 With its basement or foundation the walls of the house of the St. Mary’s Pharmacy extends not only deep into the earth, but also deep into its historical story. The actual name of the building is “Jagstheimerhaus” because Mayor Jagstheimerhaus had it built in 1448 in the immediate vicinity of the Meat and Dance House. It is a beautiful patrician house with a grand façade. The most famous guest was Emperor Maximilian I. Since 1812, the historic house is actually a pharmacy and is now run by the fifth generation. It supplies Rothenburg, its guests and some hospitals with all that is healthful.