Lookout to the valley

The Kobolzell gate is part of the old fortifications 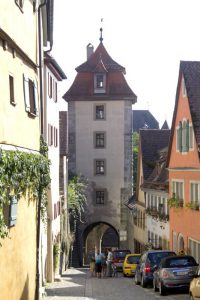 The Kobolzell way is the shortest path from the double bridge over the Tauber Valley up to the Little Square in the city. The rectangular gate tower at Kobolzell gate is older than the city walls and its inscriptions were rebuilt in 1727. At the beginning of the elongated Barbican is a small customs house. Interestingly, the so called Devil’s Pulpit is the Torbarbakane who served as a military bay window and was completely renovated in 1970. There used to be a total of four entrances that you had to pass through until you got into the city from the Tauber Valley. The Kobolzell gate was built around 1360. Today, visitors can look down on it from the Tauber Valley.