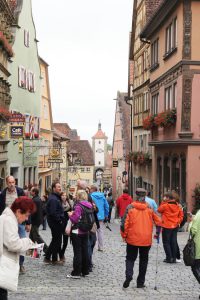 The marketplace is one of the most beautiful places in Rothenburg ob der Tauber. It is the vibrant heart of the city. If you go to the old town, you can’t miss it. Whether its the weekly market, city tours, the historic Shepherd or dance performances to the Ambassadors of Music, it “plays” in the truest sense of the word ” music “. Visitors from all over the world like to spend some time at the marketplace, to look at one of the cafes, enjoy the view of the beautiful houses and watch the goings-on. If you like, you can treat yourself here with one of the real historical picturesque Old Town Rothenburg snowballs, a really delicious Mürbeteiggebäck, a delicious pastry which comes in different versions , for example, with chocolate or Haselnußglasur. Several times a year – what isespecially recommended is the event of Pentecost where the ” Master Draught ” is celebrated. In this impressive spectacle, Knights pull on horses through the city, and in the medieval market there is singing and delicious specialties. Also, the steps of the Town Hall are a popular meeting and resting point for locals and visitors from around the world . From here you can enjoy views of the magnificent medieval patrician houses that surround the square. Every hour on the hour between 10.00 and 22.00, the astronomical clock is acclaimed at the Ratstrinkstube. Audiences delight at the key scene of the historic festival play, the ” Master Draught “. The former mayor Nusch according to tradition saved the town from destruction at the hands of the troops of Imperial General Tilly by winning a wager by drinking 3 1/4 liters of Franconian wine in October 1631. Historically, however, the story goes that the Rothenburg citizens and their children were begging Tilly on the marketplace for mercy for the city. Also in 1632 the market was at the center of action, as the Swedish king Gustav Adolf stayed with his army in Rothenburg. The King himself slept in the hall . The scariest incident took place on the square in June 1525 when Margrave Casimir of Anspach had 17 agitators of the recent peasant war beheaded.

Today, people go much more peaceful with each other. Many international friendships are made in the marketplace.