Protection after the earthquake 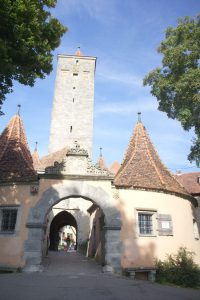 The castle was the nucleus of the city but was replaced by the castle gate with its towering tower and its romantic castle garden. From the mountains it opens up a fantastic view over the Tauber Valley and the city, which was built up on the slopes. The reason for the construction of Burgtor was a natural disaster in Rothenburg: In 1356 an earthquake destroyed the castle grounds. The goal was henceforth to protect the city, so that attackers do not invade from the west. As a natural protection for the interior a moat was used in front of the gate and the castle grounds could only be entered via a drawbridge.

At the tower, the grooves of the bridge are still recognizable. Once it became clear that it was too late to save the collapsed castle the citizens of Emperor Charles IV were given permission to use the stones for the construction of municipal buildings. The coat of arms on the door frame depicts the imperial eagle, generally the sign of the free imperial cities, which were autonomous and directly responsible to the king or emperor. The symbol for the fortress recalls that Rothenburg owes its foundation to the construction of the castle . The castle gate now forms the entrance to the castle garden – with a small park with beautifully greenery depending on the season and bloom. The banks along the footpaths invite you to enjoy the magnificent view of the unique city skyline and the Tauber Valley.