The city from below 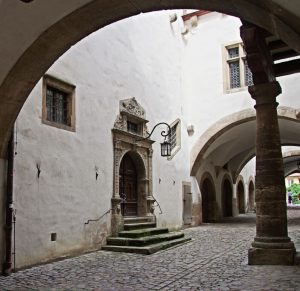 This exciting vaulted dungeon shows life as it was experienced by prisoners over 300 years ago. Nestled under the town hall, the state dungeon has an oppressive feel and a coldness that numbs you right under your skin. Rothenburg was besieged and finally conquered during the 30 years war by the Catholic troops of Count Johann Tserclaes Tilly and the prisoners thrown in here.

It was used as a torture chamber and visitors can get a real feel for the prison conditions of the time. The most famous citizen of Rothenburg, Mayor Henry Toppler was also imprisoned here. 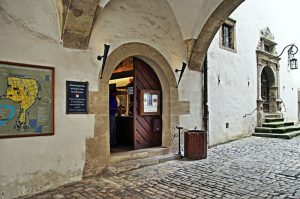 Using real life figures the museum impressively recreates little stories which represent the different situations which could have taken place in the 16th and 17th centuries. There are re-creations of a writing room and a guardroom from the period, for example. The entrance to the museum is located in the City Hall courtyard. This is accessible via an access lane from the Hermes right at the market . The State dungeon is – not surprisingly – below the town hall. Those of a ghoulish disposition should not miss it!.