The Marcus Tower And The Roder Arch

The Hipped roof catches the eye

From fortification to romantic ensemble 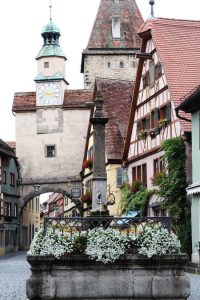 The Marcus Tower and the Roder Arch were built around the year 1200 together with the first city wall. Along with the magnificent houses and the romantic Röder well they make a picturesque ensemble. The Markus Tower is particularly attractive with its mighty hipped roof. The Roder Arch with its slender clock tower and steeple tower date from the 12th Century.

Both were part of the first fortifications, and were later replaced by the new outer ring of walls. A small customs house built in 1264 is nestled in this setting – for 500 years it has been a hostel for people traveling through and is still a family