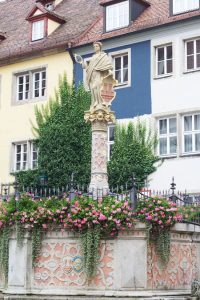 The female figure on Seelbrunnen, the chapel square in Rothenburg, embodies the Greek goddess Minerva. The daughter of Jupiter and Metis is the virgin goddess of wisdom, and patroness of the city. The Rothenburg they called Roth Burgi and dressed them a little more Frankish than Greek. The fountain, also called the Fountain Square Chapel, is in the category of running water fountain.

With its ornamental stone basin, the well column and the enthroned figure of Minerva, it is believed to have originated shortly after the year 1600, when the building of the synagogue and later the chapel was demolished and was rebuilt in 1626. Minerva holds her hand over Rothenburg and its inhabitants. The goddess is often equated with the Greek Athena, patroness of wisdom, arts, crafts and also the cities. Wrapped In her Franconian robe, the Rothenburg Minerva holding a mirror in her hand, with which she can see into the souls of men – one way to derive the name of the fountain. Another is the ” Seelhaus “, which was located in the former yeshiva or Jewish educational institution. A lay Christian community ran a sanctuary here for the poor and sick, and the well was used to supply them with water.