A mix of styles 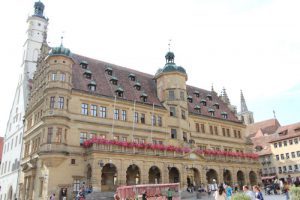 Rothenburg Town Hall with its magnificent Renaissance façade consists of two parts: The Gothic Doppelbau with the town hall tower dates from the period 1250-1400 . The painter Friedrich Herlin was betrayed to his boards at the main altar of St. Jacob’s Church. The local architect Leonhard Weidmann designed and built the most impressive building of this epoch north of the Alps between the years 1572-1578. While the eastern part fell victim to a fire in 1501, the western part is preserved with the slender bell tower today. The arcades were added in 1681, and its arches are decorated with the arms of the seven electors. The different parts of the building are connected by the atrium. The portals are shown to the left and to the right in the old Rothenburg dimensions. From the Middle Ages every small state possessed its own measurements, these were made known in the public marketplace . You can see the left ” tail “, ” Elle ” and ” shoe ” on the right side of the ” fathom “. Also architecturally significant is the Town Hall Tower, it does not have a foundation, but was only placed on the gable . The observation deck of the tower is accessible via the main entrance.