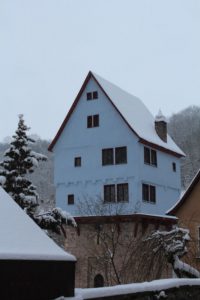 The Toppler Castle is probably the oldest surviving weekend house. It resembles a medieval tower , and is located below Rothenburg in moist meadow land at the Fox Mill. In 1388, the water castle of Rothenburg’s legendary mayor Heinrich Toppler was built partly as a home and partly as a defensive tower building in a so-called feasts house or pond house. 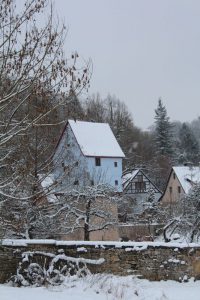 The building is fully intact with furniture and furnishing from the 16th to the 19th Century . It is surrounded by a garden, which could be flooded to protect the residents when needed. Since 1861 , the Toppler Castle has been owned by the Boaz family that at times let it as a holiday home . You can get to the Toppler Castle in the Tauber Valley via the double bridge or the Barbarossa Bridge in about 30 minutes walk from the castle garden.