The Staudt House And Courtyard

Power and influence of the patricians

The Staudt house retains all its glory in secret 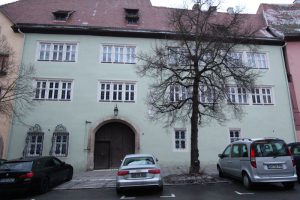 The family of Staudt belonged for several generations to the city government. By 1700, the aristocratic ceremonies were held in the Staudt – house. Jeremiah Christian Staudt was the last reigning mayor of Rothenburg as about 1802 the Staudt family lost power at the end of the Constitution of the imperial city. Their magnificent estate in the Lord Lane 18, the former avenue of the city, is still the oldest preserved patrician house in Rothenburg. It originated in the 12th Century and has been since 1644 to the present day in the family of Staudt, which were brought to the peerage by the House of Habsburg. Behind the facade extended out to the street is the spacious area that is protected on all sides by walls and is not accessible to the public. Here the former bourgeois splendor unfolded in secret, with the upscale lifestyles of the former upper class. Also here were the stables, the economic and servants’ quarters and the idyllic garden where the yew trees grow highest in Europe . They were planted in 1678. In the so-called antenna the Watch and drinking parlors are still available . The original kitchen from the time is a gem in itself. Also remarkable are the ornate wrought iron window grills of 1772 in the Baroque style, which adorn this remarkable house. Even the bell at the door entrance go great together, and represent a point of view, with the family crest above the entrance. Inscription panels show prominent visitors who lived in this house, such as the Emperor Charles V. and Ferdinand I.