The most beautiful private home of the Renaissance

The positions of wealth and power were demonstrated by the home builder, Leonhard Weidmann. 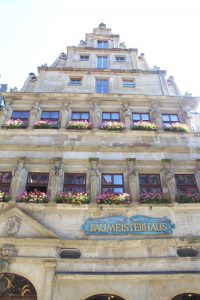 The Second to last house in the Upper Schmiedgasse, the Master Builder’s home can be seen with its ornate facade from the market place . It relates a more than 400-year history. The former city architect Leonhard Weidmann created the magnificent mansion of the city in 1596 in the Renaissance style for Senator Michael Hirsching, diagonally opposite the town hall, which he also built . It is remarkable for its volutes ( spiral Bauornamenten ) which are the ornamented stages of the pediment .

The most distinctive feature of the facade is that the window pillars represent, in the form of men ‘s and women’s statues, the seven virtues and the seven vices of everyday life. The obese man stands for gluttony, the woman with the kids for motherhood and the man with a hand chopped off, for fraud.The elaborate facade was based on the prosperity of the client, and it served to demonstrate his power. The originals are in the Imperial City Museum. 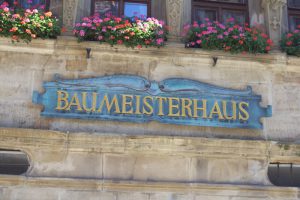