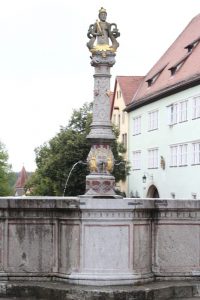 The Lord’s fountain in Rothenburg is one of 40 wells that were built in the Middle Ages. The large number of wells is due to the geographical location of the city, which made it difficult to provide sufficient water permanently for the population. The cattle market was held by the Lord’s fountain. Today, the baker baptism festival days is celebrated in the imperial city. The fountain, which derives its name from its location in the Lord’s lane, which according to an inscription dates from 1595, is stylistically late Renaissance. The figure on the pillar is a mermaid with two tails representing fish : with a golden crown on her head and a golden scepter in her hand .